Sala Burton Manor is a nine-story, 89-unit building which used to be owned and operated by the San Francisco Housing Authority (SFHA). Located at 430 Turk Street, the 69 studio apartments and 19 one-bedroom apartments are occupied by seniors and people living with a disability, and range in size from 414 square feet to 556 square feet. There is one two-bedroom apartment. Built in 1987, the property was designed and constructed by the San Francisco Housing Authority as a mixed-use building. The residential portion consists of a modest ground floor lobby and floors three through nine of apartments. The remainder of the first two floors of the structure, former headquarters of the Housing Authority, remain in the possession of the Housing Authority.

As a part of the Department of Housing and Urban Development’s national Rental Assistance Demonstration (RAD) program, the Housing Authority’s Commission approved the selection of TNDC in 2014 to lease the site and acquire, rehabilitate, and recapitalize the existing improvements. Starting in October 2015, TNDC managed the occupied rehabilitation of the residential portion of the building, which included new kitchen and bath cabinets and counter tops in residential units, upgraded mechanical, electrical, and plumbing systems, improved fire protections, and installed new mobility and communication units. TNDC also expanded the ground floor space into a portion of the commercial office space, gaining space to augment the lobby, provide a dedicated Community Room with warming kitchen, and office space for property management and support services offices. Residents were temporarily relocated on a floor-by-floor basis to accommodate construction.

Take a virtual tour of Unit 801 at Sala Burton Manor! 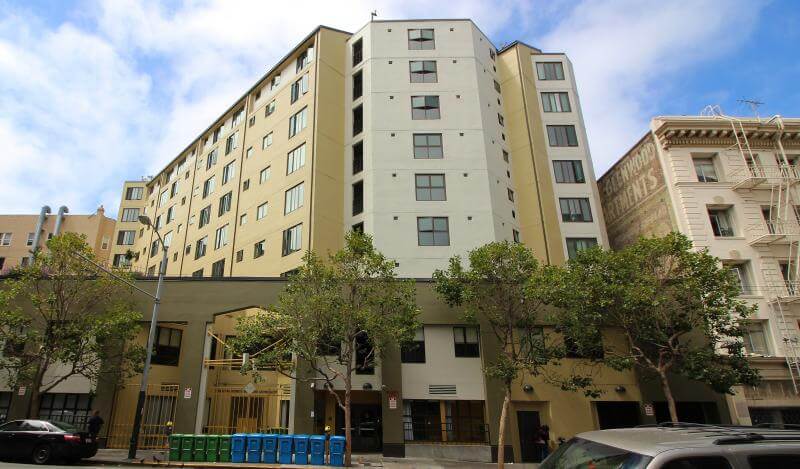